KNL Photo of the Month 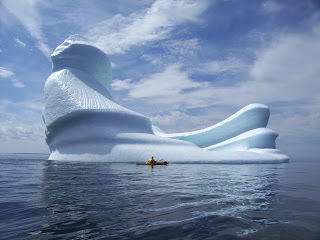 Hurray! My photo submission for the Kayak Newfoundland and Labrador (KNL) photo of the month contest won first place.

If you want to see a few more pictures from this kayak trip, you can look back through my archives through July.
However it was not without a bit of controversy on the KNL Google Newsgroup. Some felt it was not a good idea to post pictures of kayaks near icebergs on the KNL website; If people want to take risks and go near icebergs, thats their decision, but KNL should not show them.
KNL decided to post the picture, with a disclaimer. Good choice.
Michael Kay has a very interesting post about sport and risk, where he touches on the issue of icebergs and kayaks. Check it out. http://mak57.blogspot.com/
Also Alison Dyer was nice enough to post my picture on her blog, http://thesquidink.blogspot.com/ Thanks Alison!
Anyways, bring on the spring!
Rock over London, Rock on Chicago
Brian
Posted by Brian Newhook at 1:28 PM 2 comments: