While taking our daughter for her first swim, I discovered that my waterproof camera, the Panasonic Lumix DMC-TSC1, had leaked water into the battery compartment and had died. Just Great. A $400 camera thats supposedly "waterproof" is ruined from being in the water. Just F'n great!

Anger stewing in my brain, we left to drive back home. Not 5 minutes from our house, all I can see is the ass and hind legs of a large animal. MOOSE!!!! I slam on the brakes and cut the wheel to the left to hopefully avoid the huge animal. The sound of smashing glass and my wife screaming. I can't believe what just happened, we hit a moose. I manage to pull the car off to the side and we scramble out the check on Heidi. Angie is covered in glass, but otherwise is ok. Heidi is awake in her rear-facing carseat. She is fine. We got lucky.

The car, nor the moose wasn't so lucky. The moose was dead on the road and cars were swerving to avoid it, and some people stopped to see if we were ok. Me and a few guys managed to drag the large animal off the road so one else would hit it.

The police show up, write up the report, determine the car is ok to drive back to our house, as its just up the road, but Angie had to sit in the back due to all the glass in the front. We covered Heidi with a blanket to make sure no glass got on her from the wind blowing on what was left of the windsheild.

We get home and make some phone calls. We are a little shaken, our appetite for supper was gone, but we are ok. 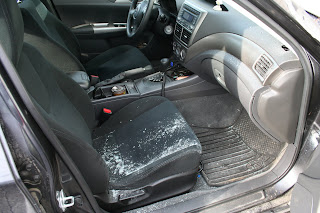 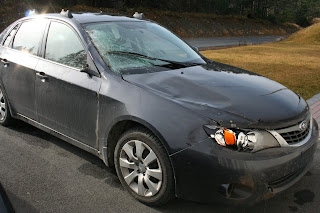 Our camera is busted, our car is most likley a write-off...........but who gives a shit, its just material stuff, it can all be replaced. Before long Heidi was asleep in her crib, and Angie and I were relaxing on the couch watching Sopranos and snacking on chips. We are lucky.
Posted by Brian Newhook at 7:54 PM 4 comments: