July 14-18, 2011. It was time for the annual Gander River Canoe Trip. This was my third year of what I hope will be many, many more for this trip. This year we had 16 friends, lots of food and lots of beer. The only thing missing was great weather, but we certainly made the best of it. The week before a few of us saw KISS in concert, and it poured the whole show, and they rocked. So we figured if KISS can rock it up in the rain, so could we. 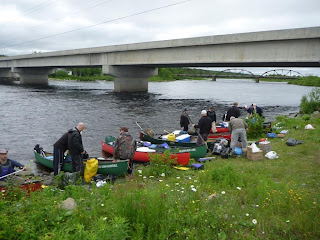 Packing up and getting ready to leave Glenwood. We pretty much have it down to a science now. Its amazing how much gear you can fit in a canoe versus a kayak. 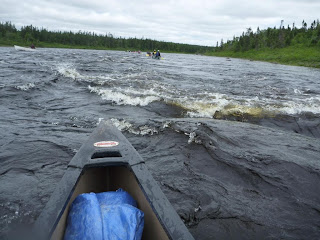 Hitting the first few rapids. The worst of the rapids on this river are all within the first half hour of paddling, with the exception of a few rattles at the very end. We usually get dressed to get wet for the first bit, then change into something warmer if the weather is chilly, which it was this year. 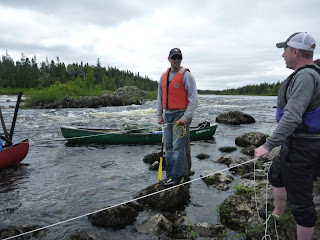 For the first time in 11 years, not one canoe ran Big Chute, the biggest rapid on this river. We just couldn't find a sensible line on it, and with the canoes loaded down, and about 25kms left to paddle before our campsite, swamping a few canoes and having to retrieve all the gear, get dry, etc. would not have been good. Wise decision I think. 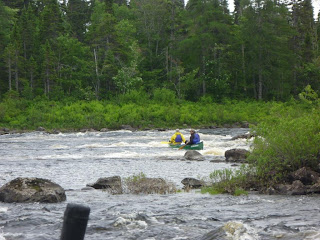 While waiting for everybody to lower their canoes down the rapids, Mark (Gilly) and Paul went up to play around in the rapids. 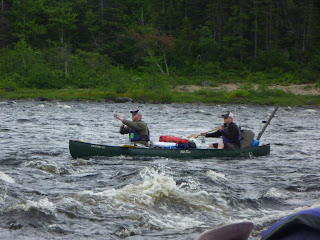 Colin and Taylor did the same 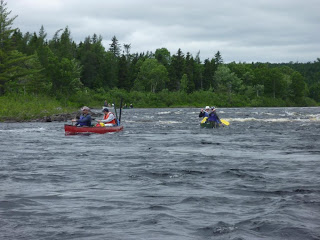 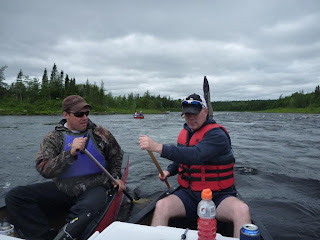 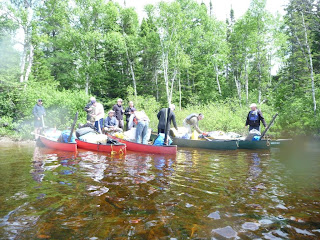 Stopping for a lunch. Mark had a few flicks of the rod, with no luck 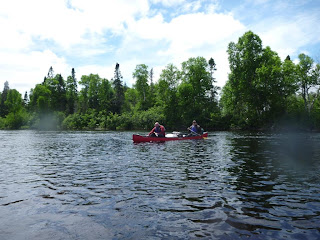 Andrew and Mark Murphy. Mark was one of two rookies this year. A fine job for the first time on the river. 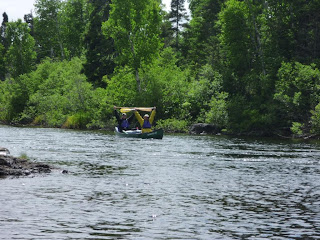 Gilly and Paul. Paul was another rookie this year, who also did an awesome job. 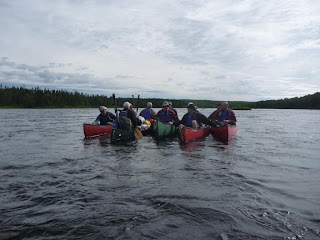 With about an hour or so of daylight left, we arrived at our campsite at Lou's Pool only to find that someone else was already there. There aren't a whole lot of places to camp on this river, so we were kind of bummed. But our fearless leader, Gilly said, "no problem boys, we'll make a spot about a 150 feet down the river". So our small army went ashore and before dark we had a spot cleared, all the tents pitched, tarps ready for rain, a fire going and even a salmon fresh out of the river on the grill, courtesy of Gilly. The guys camped next door coulded believe it, said it was like watching a bunch of army ants going to work. We got a great group of guys on this trip, I must say, and everybody knows what to do, and helps everyone out getting all set up. 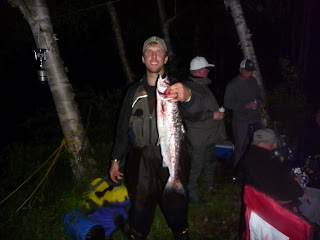 Gilly with the first salmon of the trip, caught within 30 minutes of getting ashore. They don't get any fresher than that. 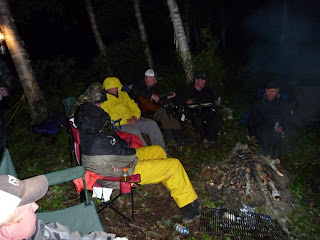 Around the fire on the first night. As you can see, it wasn't the warmest weather. But never to cold to have the guitars out. 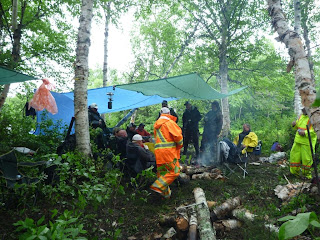 The next day was supposed to be set aside for fishing, but it poured all through the night and all the next day, plus it was blowing sideways, so we spent the day under the tarps, drinking and eating. Couldn't really complain about that! 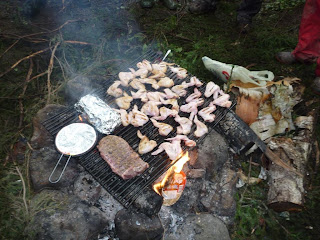 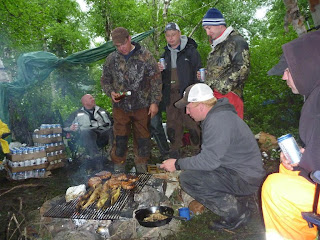 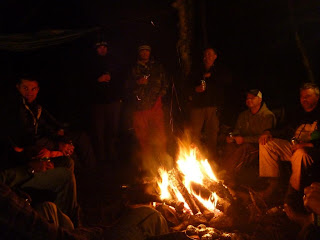 Night #2 was a bit bitter in terms of the weather, and we had another awesome night of singing and guitar playing. Great job from Stricko on the harmonica and bongos. Murph came out of his shell and did a great job singing some tunes too. 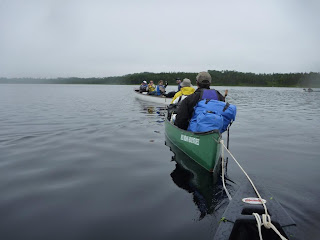 We left the next day by dinner time to head to our next camp site. A couple big ponds to cross along the way, and we usually have a nice southwest wind at our backs along the way. Not today, we had the wind in our face, but luckily a riverboat came along, and they knew Gilly and offered to tow us down the pond. How awesome to sit back, relax, drink beer and watch the world go by. 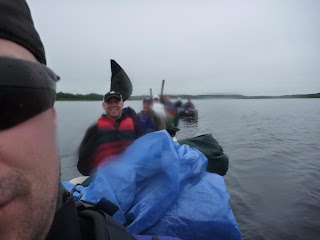 8 canoes towed end to end. We were very pleased. 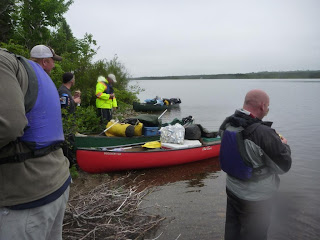 Another lunch break. Nap time for some folks :-)

We finally made it to Kevin and Roseanne's cabin, got all set up and had another great night of drinking, eating and laughs. I neglected to take any pics while we were there, but as usual it was a great time. 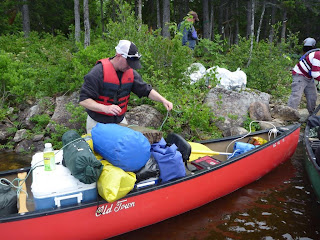 The next morning, sadly, we had to pack up and make our way to Gander Bay. Its only a short 2 hr paddle, but its a great section of the river, with a couple nice rapids along the way. 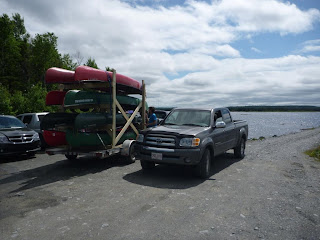 Packing up to leave Gander Bay. Paul from Riverfront Chalets met us there to pick up the canoes we had rented. 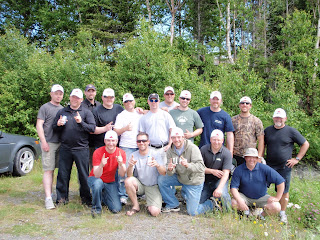 Sad to see another trip over, but so happy to have done it again for another year.

Posted by Brian Newhook at 7:54 AM No comments: