I Made 'The Telegram'

This being arthritis awareness month, I've done some interviews with local media about my experiences. Below is a link from a local paper, The Telegram, who interviewed me over the weekend:

My job has me traveling to Vancouver from time to time, doing work with Vancouver Shipyard, aka Seaspan. Normally its a very busy time, and there is very little time for leisure, but this trip was a little different. Unbeknownst to me, August 3rd was a holiday in BC, so the shipyard was closed, leaving me and my coworker, Rob Cranford free for an entire day. My first thought was 'where is the closest place i can paddle?'

Turns out the answer was only a 15 min drive from our hotel in North Vancouver: Deep Cove in Indian Arm!

All together we paddled about 20kms. Such a nice escape from the hectic pace that life has become. My knee held up well for 8 hrs of paddling, although at the end of the paddle i had to change positions of my leg a few times to give it a rest from being in the same position so long.

And of course, no trip to BC would be complete without taking in a concert. I got up to see my fave band Current Swell play in Squamish at the music festival. As usual they were awesome!

We are in the midst of the worst summer in recent memory. As of now its been the coldest July in over 20 years. Its been foggy, rainy and windy for weeks and weeks. Not very good for paddling, so I haven't been out at all.

On a brighter note, Angie and I took a short trip to Ireland earlier this month to see AC/DC at Aviva Stadium. It was a great trip. We didn't get to go kayaking, but we did get up to Northern Ireland to see the Giants Causeway. Thought I'd share a couple of pictures of our trip.

Posted by Brian Newhook at 10:00 AM No comments:

Earlier this month myself and 2 friends, Trent Hardy and Rob Scott, spent 6 days kayaking around Isla Espiritu Santos in Mexico. It was fantastic! I needed a break from work, as 50-60 hr weeks had been wearing me down and I've been trying to get a trip like this off the ground for a few years now, and it felt so good to finally make it happen. Below is a little trip report on our journey.

First off, IES is located in the Gulf of Californina (aka Sea of Cortez) near the town of La Paz, which is on the lower end of the Baja Peninsula, in the state of Baja California Sur, Mexico. The flight from Mexico City is a little under 2 hrs.

I contacted www.kayakbaja.com, who are located in La Paz, and they were very helpful in providing us information to help us plan our trip. They gave us an excellent map with descriptions of each beach and lots of other tips. We were able to rent all our gear from them (kayaks & equipment, tent, sleeping bag & pad, wetsuit, snorkel gear and dromedary bags). They even had 2 bottles of white gas to sell us, saving us a trip to the gas station to pick some up.

To begin, we flew from St John's - Toronto - Mexico City. We decided to do an overnight in Mexico City to go and see the ruins of Teotihuacan. What an experience, MC was nuts. The ruins are abou a 45 min taxi ride (cost $65) from the airport and the traffic was insane. I've been a few places, and that was something else. But our driver was good, very friendly and got us to our destination safely. We stayed at Villas Arqueologicas Teotihuacan, which is right next to the ruins. The hotel was inexpensive, and nice. The ruins were unbelievable, with the tallest pyramid in the western hemisphere. I'll share a few photos of that, because its amazing.

The next morning we caught our flight to La Paz and got a taxi to hotel Posada LunaSol, where kayakbaja is located. We got there by 11am, compiled all our gear, then got a taxi to the grocery store (huge, similar to a Dominion here, with clothing, pharmacy, etc..) it had everything you could want or need, including liquor. We had brought our own MREs for suppers, but added some fresh groceries to round out our meals. With no refrigeration, and temps in the high 20s everyday, things don't last that long. 30 mins later and we were back at hotel (total cab fare, $15, including him waiting for us).

The big problem you have here is water. There is NO DRINKING WATER on the island, so you have to bring your own. 1 gallon per person per day, and i must say that was pretty bang on for us. Now, how to carry 18 gallons of water in 3 kayaks along with everything else for 6 days is another problem. We bought 18 gallons and the store, and were able to rent 11 dromedary bags from kayakbaja, which was great, made them take up much less space.

Within an hour or so we were ready to be get our shuttle out to the island, which we shared with a British couple who had rented a double and were going for 3 days. The shuttle took an hour or so from La Paz and we got dropped off on a beach on the south end of the island.They said they would pick us up back here at noon in 6 days. Adios!

Didn't take us long to get packed up and hit the water. It got dark around 6-7pm, so we wanted to get as much exploring done as possible before it got dark. The beach where we got dropped of was being used by and outfitter, who was busy preparing food. We chatted with him and he offered us beer and taquitos, where were awesome. He was waiting for a group to come the next day, so he was busy setting up their campsite. I can't drink alcohol, so when I declined the beer he offered me a soda. Nice fella. What a nice start to the trip!

Our plan was to paddle about 8kms to beach #3 (they were numbered on the map we had printed off). Its amazing how everything is so new and amazing when you are in a new place, especially if you have never been there before. I had never been to this part of the world, so seeing cactus and this type of desert landscape was amazing for me. The island itself is very hilly and mountainous, a lot more than I expected, so it makes for quite the backdrop to paddle against every day. 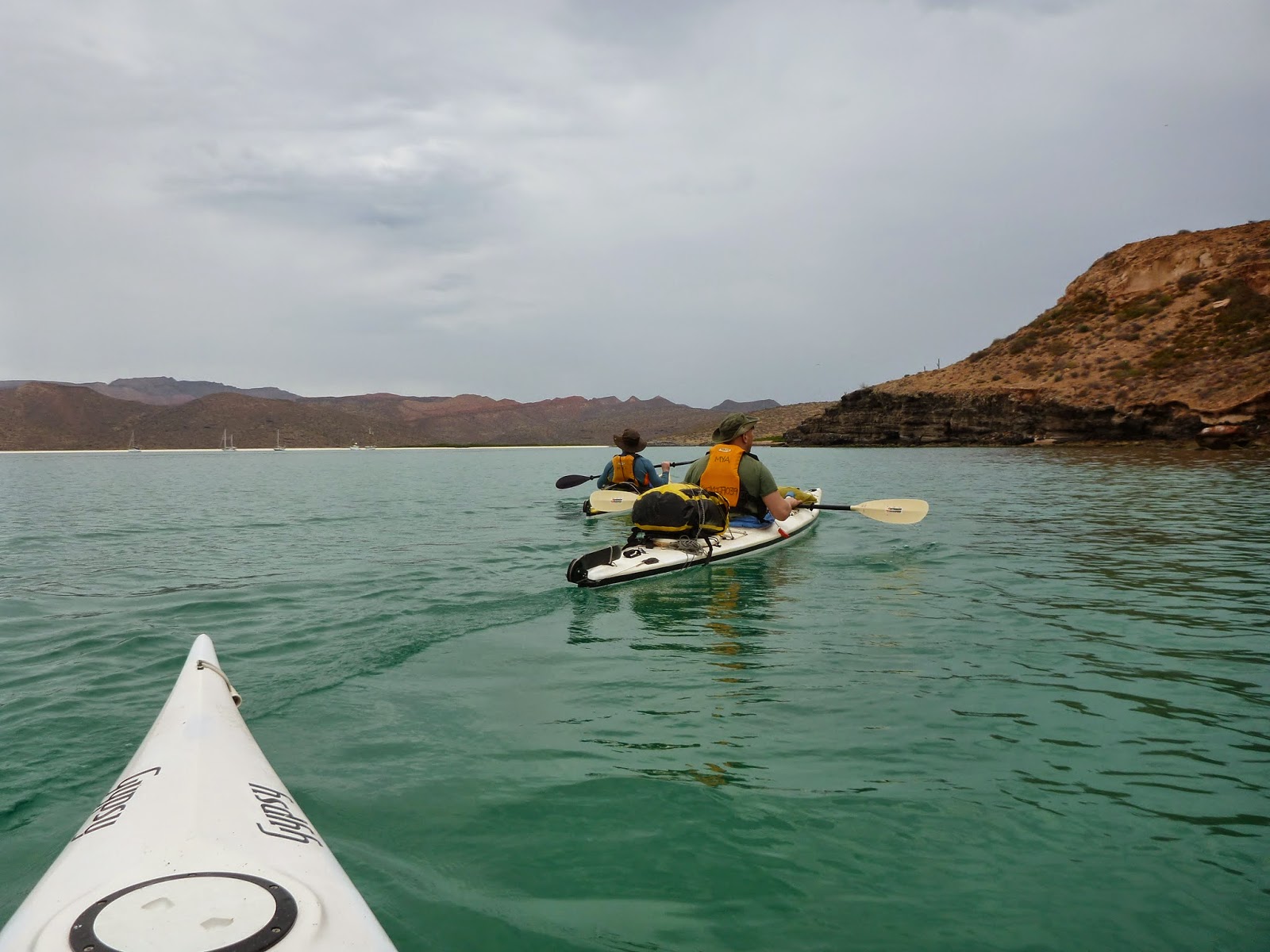 The next morning we hiked to the top of the ridge to survey the scene. Spectacular view all around.


After breakfast and coffee, we were back on the water. The plan was to find some good snorkelling...which was pretty much everywhere. Rocky spots are the best, thats where all the fish hang out. The first cove we went into had a lot of mangroves, which meant a lot of birds (and bugs) We watched the pelicans diving for small fish for a while, it was amazing. We did some snorkeling around beach #5 after lunch, but I forgot to take my camera. The total distance paddled for day two was 15kms.


Before supper we snorkeled out through the cove, swam to the other side and snorkeled back to the campsite. That was awesome, lots of little nooks and crannies to poke in around. That evening, we were getting supper and saw some movement on the rocks. Turns out it was a ring tailed cat who was curious. Later that night he got into our kayaks and tried to get some of the bags open. I had to go out and shoe him away. I didn't get a picture, but here is what they look like.

Beach #9 was supposed to have amazing snorkelling, so we were excited. It is also the main beach for outfitters on the island, so it can be busy with other kayakers and boat traffic. On the way in we spotted this guy, he was about 4 feet across. Huge! I was very excited about this, first time I ever saw one while kayaking. We also saw some manta rays from our kayaks, but no luck once we started snorkelling.

The next morning we headed out to Los Islotes, an small cluster of islands on the very northern tip of the island chain. This is where the sea lion rookery is, and is what brings most people to this area.

We paddled around them for a half hour or so, the young ones where very curious, following us around, jumping and flipping around. There are several buoys around the island, so we tied up to one and got out of our boats to snorkel with them (no where to land on the island, and its also forbidden). Snorkelling with these sea lions was one of the coolest things I have ever done, hands down. What an amazing experience. 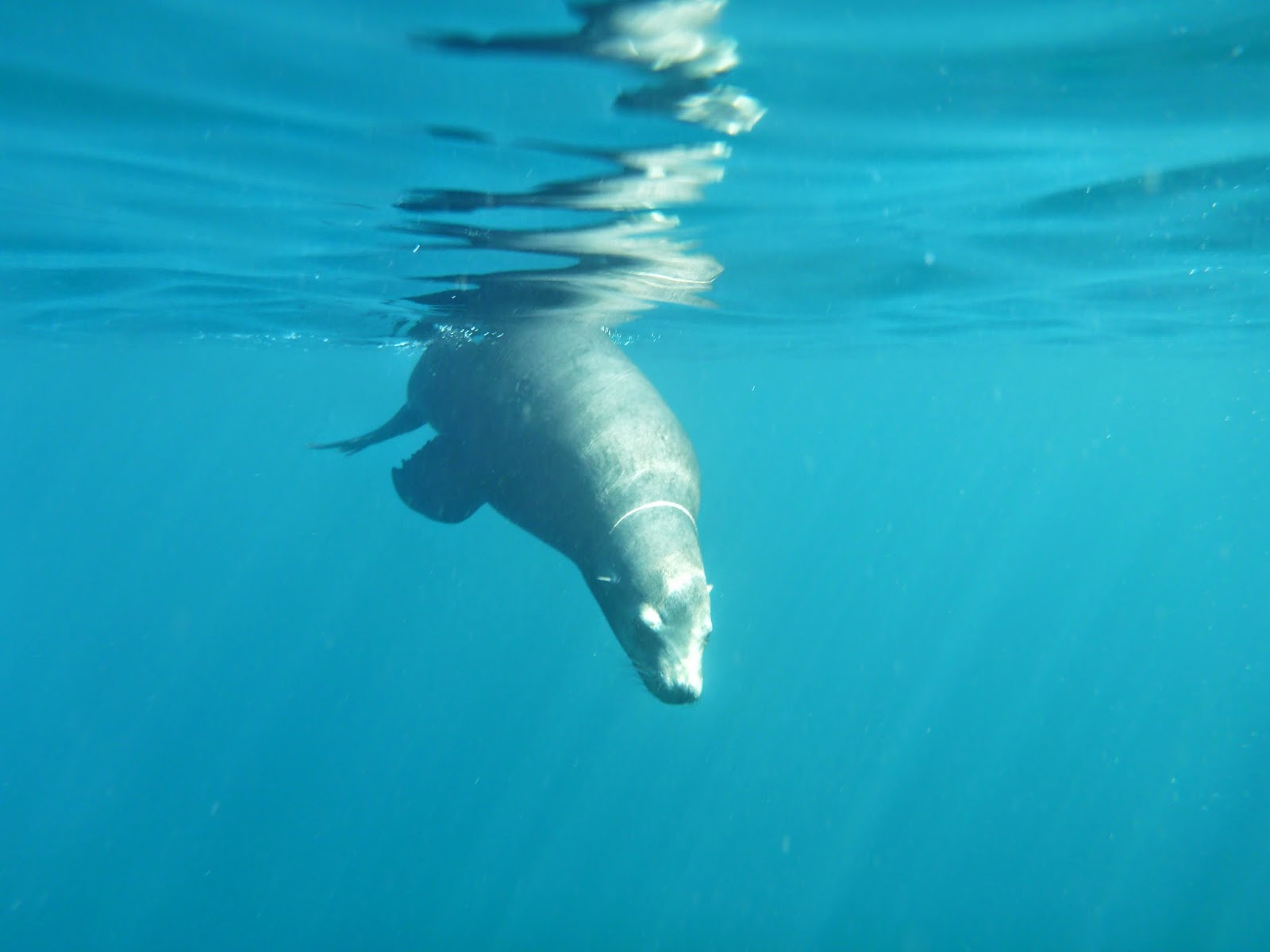 We did a bit of snorkeling in the afternoon, the crossed over where Partida and Espiritu islands meet up. You can wade across the stretch of water between the island at low tide.
We made it back to beach #10 right before dark, total distance paddled was about 23kms. What an unreal day!


The next day we planned to paddle back close to where we were gonna pick up, and then take it easy and relax for the day. Along the way, we saw a manta ray close to the surface. 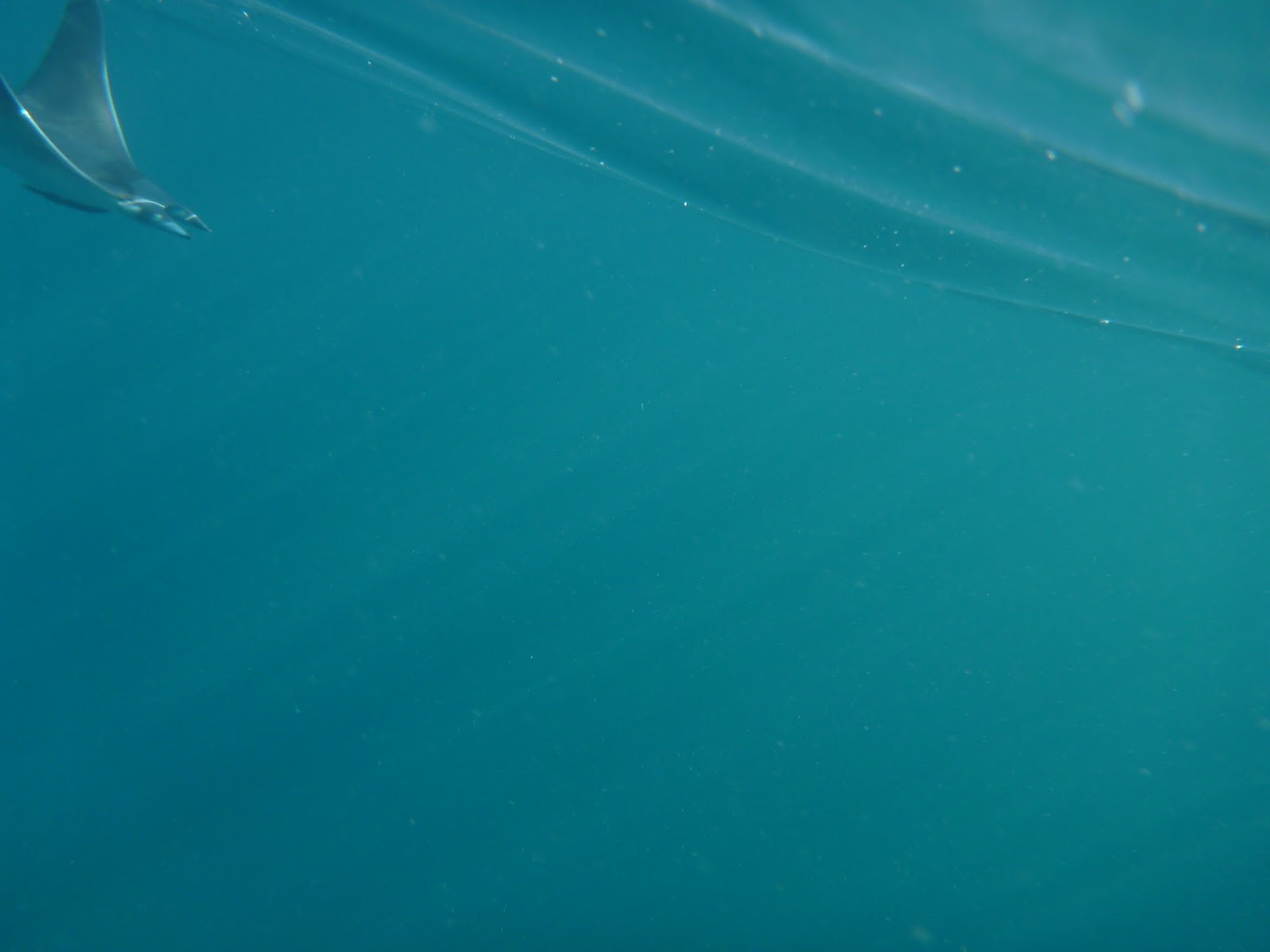 Rob really wanted to snorkel with mantas, and low and behold we came across two huge mantas that were on the bottom. Rob booted into a beach, got on his snorkel gear while I kept track of where they were. Trent then towed him to the mantas and he was able to get next to them. They were about 8ft across. I couldn't get a picture when he was next to them, but got a few of the mantas. 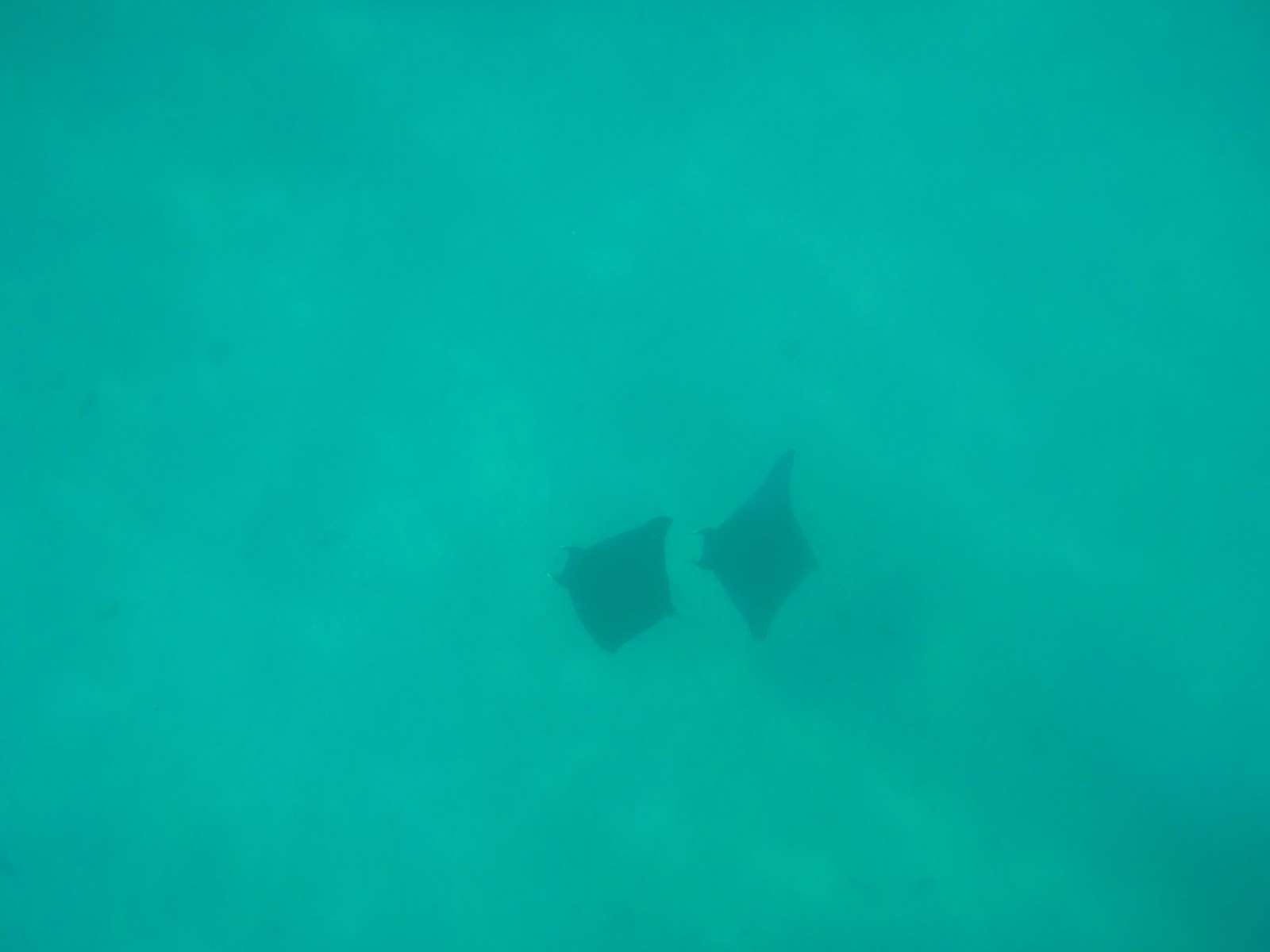 After 6 days, we were very sad to leave. What an amazing trip! That said, it was nice to get back into town, get a shower, a cold drink and a juicy steak :-)

My knee held up really well, which was a surprise. I thought the snorkelling would be more troublesome, but it wasn't bad at all. Bit of grinding and crunching going on in the joint, but nothing serious. I can safely say my arthritis is under control. Hopefully it stays that way.


Posted by Brian Newhook at 9:56 PM No comments: