Another Hike, Bellevue to Chance Cove

No paddling again this weekend, but I did get outside for a few hours. Yesterday, Trent, Ringo the dog, and I hiked from Bellevue Beach Park to Chance Cove and back. It was an interesting hike, and took about 4 hours. I'd say we walked at least 11kms, but probably more due to amount of detours around felled trees and losing the trail, finding our way back onto some sort of trail. Hurricane Igor laid a beating on this area. and there wasn't much of a trail along the way.

The "trail" basically follows the coastline, most of which are high cliffs that lead you down to some really nice beaches along the way. 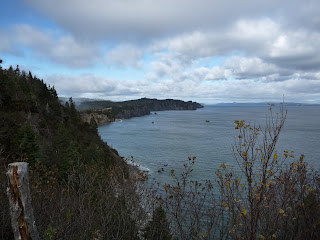 The starting point is the lookout in the Park. 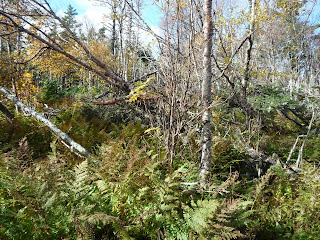 This is what the trail looked like most of the way. Thanks Igor 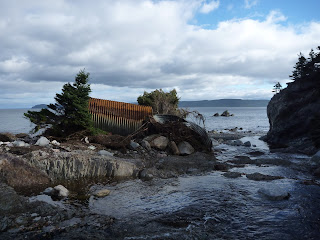 This culvert used to below to the road not far from here. Igor completely washed away the road in this area, but has since been repaired. 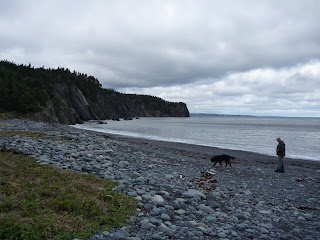 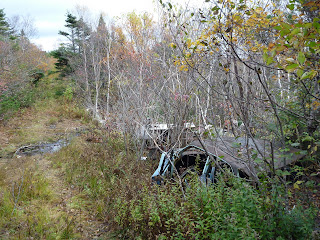 Ah, the wonderful signs of nature. About 20 car wrecks strewn in a row near the pole line. Hurray for mankind. 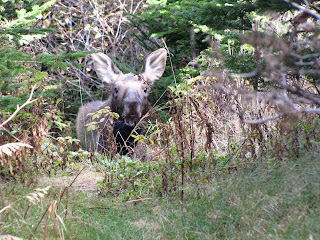 A cow moose checking us out. She was lying on the middle of the trail, having a snack. She didn't pay much attention to us, so we watched for 5 minutes or so, then made a detour around here. Below is a short video of the encounter: 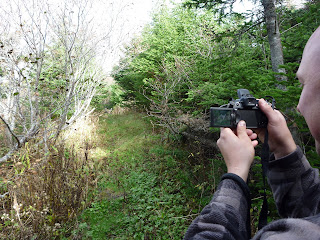 A picture of a picture being taken 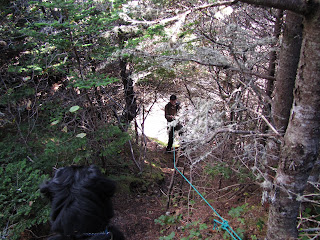 To get down into one of the coves, someone put a rope to help you out. Nice touch. 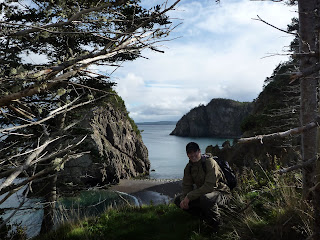 A view from on top of the cliffs 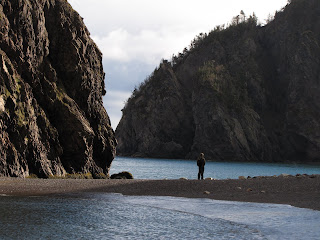 What a cool spot 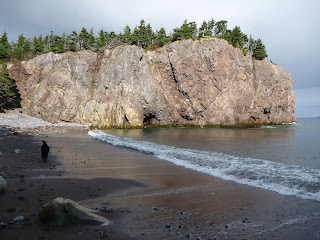 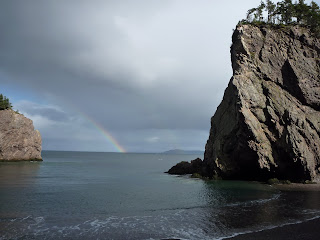 The past weekend, Trent and I hiked another section of the East Coast Trail. Of the developed 254kms of trail, I think I have now completed about 138kms. I used to hike a lot, until I discovered kayaking, which really put a damper on the amount of hiking I did. I'll continue to pick away at this trail over the years, but my primary hobby will remain kayaking.
This section of the ECT is 18.3km and rated as Difficult/Strenuous. It also took a beating from Igor with the website classing the damage as "Very Heavy" and clean up status as "Uncleared". This made for an interesting hike, with a lot of detouring and climbing over and under a lot of fallen trees.
This was the most unprepared I'd ever been for a trip. I basically threw all my gear in my trunk, and drove to the trail head in Cape Broyle. I met Trent in the parking lot of the Ultramar and we just jammed as much crap into our bags as they would take. So much for the lightweight backpacking philosophy I used to follow so strictly. Thats one way kayaking has ruined me. I'm so used to just throwing everything in my hatches and paddling off, that to go back to being concerned about ounces was a pain in the butt.
This was also my first hike with my new backpack the MEC IBex 80. Pretty nice bag. By the end of the trip I had finally figured out most of the features of it. But again, I was very unprepared and rushed, so I kinda figured it out as I went.
To top off our loads, we brought a half dozen beer each. I put a pack of frozen bacon on top of my beers which kept them nice and cold by the time we got to our campsite, at about the 7km mark on the trail.
So we hit the trail at about 2pm. Didn't take me long to realize how far out of shape I was. Whew, it was going to be a long 18km. 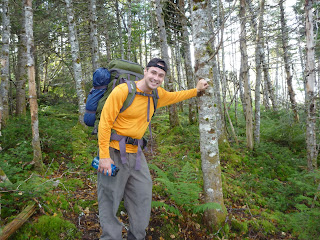 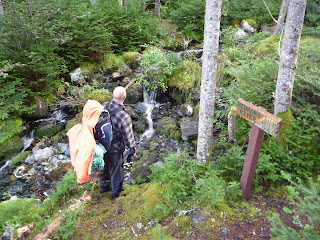 No where else to put the rain gear....so hang it on the back. 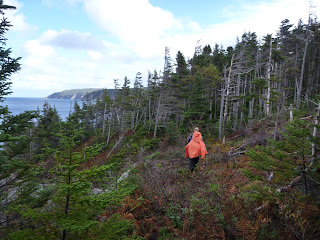 Won't get mistaken for a moose or bear that way! 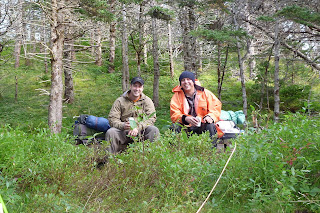 Stopping for a beer at the Lance Cove Campsite 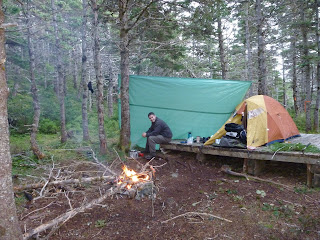 All set up, including our windbreak. 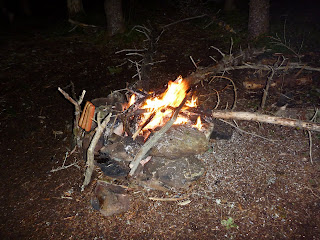 Trent's patented "3 Hour HotDogs" in progress.
That evening, we drank a few beers, shot the shit, and had some good snacks, including the 3 hour hot dogs shown above. All night coyotes were howling in the distance, something I've never heard before. Very cool, but also unnerving.
We were up around 5am, got our breakfast, packed up and started walking. Right away I noticed my right knee was feeling strange. As soon as I started walking down hill, it felt like it was going to pop. Oh well, only 11kms to go. 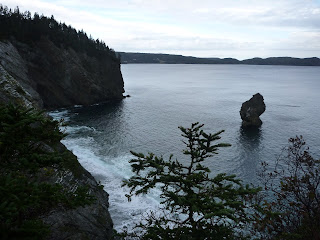 Big sea stack in Lance Cove. We paddled around that one back in July. 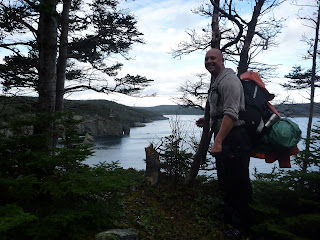 Trent at a view point 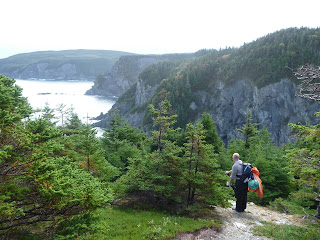 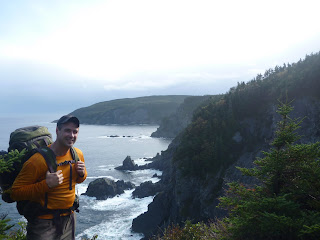 Me at Shag Rock Cove.
After a while I was really feeling it, and had to basically limp down each hill. Climbing over all the deadfall was not that much fun either. The map showed a short cut, that basically cuts overland about 2-3kms to come down into Calvert, basically cutting off the 5 km or so of Cape Broyle Head. We decided this was our best option, due to my bum knee.
As soon as we turned off the main trail and on to the side path, it started to rain, and the path quickly went from a well developed ATV path to a marsh. Staying on any sort of path was difficult, and it kept disappearing and criss crossing other paths and ATV trails. We were often up to our knees in mud and were soaked from the driving rain. We also got turned about a few times, but eventually found our way down over the hill and into Calvert. By the end of it my knee was really bad and I was limping. 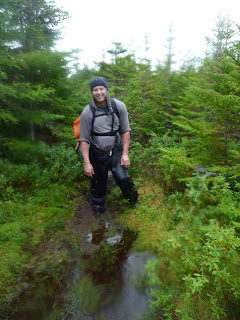 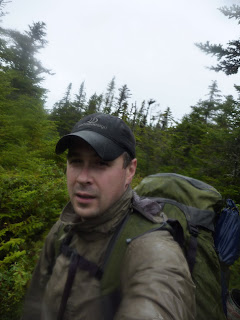 Soaking wet, but having fun 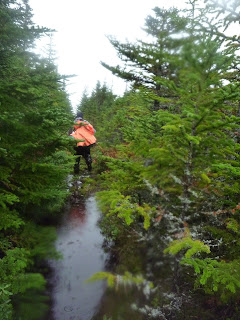 A typical section of the shortcut path
If you are planning to do this hike, stick to the main trail and don't be tempted by the shortcut shown on the map.
Despite the weather and my knee, overall it was a great trip. I was very happy just to be outside.
My knee is better now, 4 days later, but it concerns me a lot, as I plan to do many, many more hikes over the years, longer and tougher than this one, so I hope its not a reoccuring thing. If it happens again, I'm gonna have to see a doctor.

As we move into the fall, I find myself paddling less and hiking more. Back in September me and Trent hiked the Centre Hill Trail, in Sunnyside. The trail is approx. 10kms return, and took us about 3 hrs, including a stop to boil the kettle and have a cuppa tea.


The trail is well marked and maintained, and very easy except for the last bit, which is climbing the 1153ft to the top of Centre Hill. Its the highest point by far in the area, and was used as a fire tower from the 1930's to the mid 1960's.


The panaramic view from the top is amazing, and well worth the hike.

Centre Hill from a distance 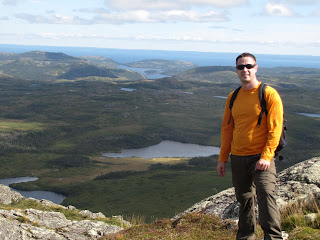 Me from the summit, with Trinity Bay in the background 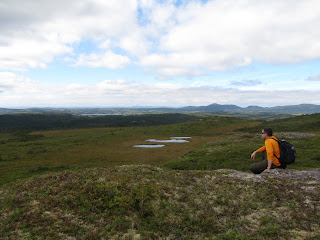 Facing South, with Sunnyside off in the distance