Over the long weekend, me and my buddy Chad Chislett got out for an overnight canoe trip. I have been sizing up this potential trip on Google Earth for the past few years, thinking "I bet you could do that in a canoe". We had planned on leaving Saturday and returning Sunday, but the winds had other ideas, so we put it off for a day. Sunday morning we hit the water. The weather was perfect, although a little bit chillier than I thought it was going to be.


The plan was to take our time, and fish our way down to the foot of Ocean Pond and camp for the night, get up early, and fish/paddle our way through the series of ponds and rivers that eventually come out in Markland, where we had left Chads car. The total distance of about 21kms.

Lots of boaters on the go in Ocean Pond, there are so many huge cabins on the pond, and almost every one has a boat house. Trouting season just opened, so lots of people were out trying their luck. So were we.﻿

We were hoping to get a meal of trout to cook that evening, but all we caught were ouananiche (land-locked salmon). They are lots of fun on the rod, but not very good to eat. It only took a couple of hours to fish/paddle our way the 7 or so kms to the camp site. The flies were out in full force, so we had to get a nice smokey fire on the go right away.


The is a small dam at the end of the pond, and there was lots of boat traffic going there to try for a few trout, but from what we heard, no one else was having any luck either. So no trout for supper for us, ribs and chicken instead! With our bellies full, we had a few drinks and shot the shit around the fire before going to sleep. We were awake around 7am to another glorious day.

Similar luck with the trout this day as well. The rivers didn't turn out to be too bad, and the unknown of what was around the next bend made it that much more fun. Awesome trip overall. It could easily be done as a day trip, or in a sea kayak if the water levels are high enough. But I wouldn't take a fibreglass boat, or a carbon fibre paddle thats for sure :-) 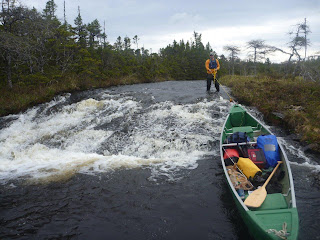 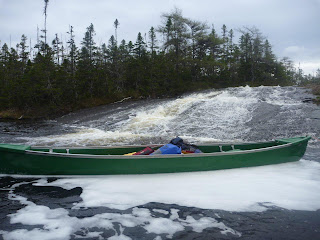 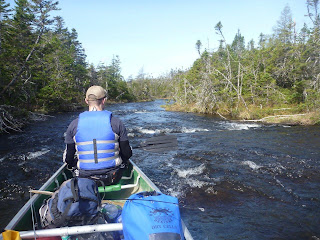 Got back in the saddle yesterday evening. First time on the water since November! Oh how having a child changes things. Anyhow the stars aligned yesterday I was able to go to Spread Eagle and paddle to Southern Point, take a peek into Chapel Arm than paddle back. A leisurely paddle of about 8kms. Saw 2 eagles hanging around the nest in that area, but didn't see or hear any eaglets. Lots of people trying for sea trout also, now that the season has started. The sounds of the water, the salty air, it was great to be back on the water again. I'm hoping a planned overnight paddling trip for this weekend will work out, been a while since I've been in a tent also. Have a good weekend everybody. 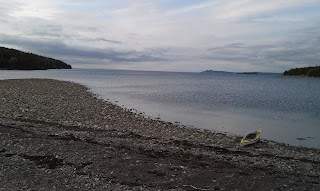